This week I did not buy any book due to my March Resolution not to buy any books.
But those books keep coming to my shelf
:D
Here they are.
I have posted Ghostgirl #3; Lovesick in my Waiting on Wednesday and now I have it 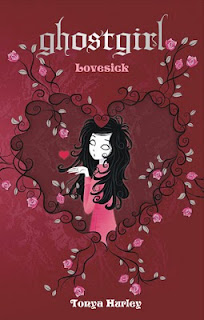 Before she can rest in peace, Charlotte Usher must return to the tragic site of her death: high school. Once there, her assignment is to help a designated teen solve a personal problem in time for the all-important prom. But no one explained what happens if you fall in love with your class project. Charlotte would die (again) for love but facing the all-too-familiar feeling of invisibility may be too much for her to swallow

I won that book above from a giveaway that was held by Penerbit Atria in twitter.

It's going to be a long, hard, cruel winter. And there couldn't be a worse place to spend it than up on Anglezarke.
Thomas Ward is the apprentice for the local Spook, who captures witches and drives away ghosts. As the weather gets colder and the nights draw in, the Spook receives an unexpected visitor. Tom doesn't know who the stranger is or what he wants, but the Spook suddenly decides it's time to travel to his winter house, Anglezarke. Tom has heard it will be a bleak, forbidding place, and that menacing creatures are starting to stir somewhere on the moors nearby.
Can anything prepare Tom for what he finds there? What if the rumors about the evil beast called the Golgoth are true? And how much danger will Tom be in if the secrets the Spook has been trying to hide from the world are revealed?

Thanks to Penerbit Matahati who sent me this book.
It is the third book of the series. I have had the first one but not the second. It's been on my shelf FOREVER. I think I am going to read it soon, buy the second book then move to the third. I love the cover. It's lovely, isn't it?
I still have two more books Dragon Hatcher by Bruce Collive and Pretties by Scott Westerfeld. But I can not find the cover with good resolution.
So what do you have in your mailbox?
Feel free to leave the link of your post. I am going to visit you back.

In My Mailbox is hosted by Story Siren

Carrie at In the Hammock Blog said...

the ghost girl books are so much fun!!

Splash Of Our Worlds Mailbox

Ooh GhostGirl! Cool. I love all the detail in those books (illustrations), they're soo cool! :) have a great week.

I love the cover of Spook's Secret - never heard of Joseph Delaney before but I like the sound of this book. Will have to go check him out.
Happy reading.
Sally.
http://theelifylop.blogspot.com/2011/03/in-my-mailbox-9.html

I have the first Ghostgirl book it read, but I haven't read it yet. Oh, now I really want to read it. Enjoy your new books!

Very nice mailbox! Thanks for stopping by and checking mine out!