For this week, I just got some books. Here they are:

The Opal Deception; A book from bookdepository that I won from Sniffly Kitty a month ago. 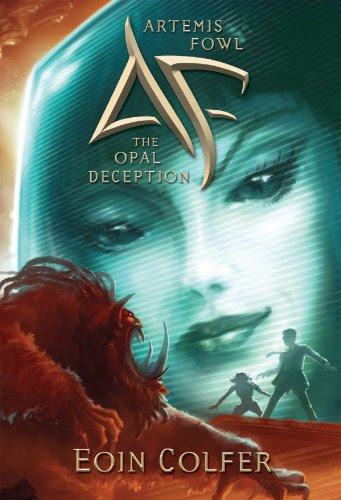 From Goodreads
The evil pixie Opal Koboi has spent the last year in a self-induced coma, plotting her revenge on all those who foiled her attempt to destroy the LEPrecon fairy police. And Artemis Fowl is at the top of her list. After his last run-in with the fairies, Artemis had his mind wiped of his memories of the world belowground. But they have not forgotten about him. Once again, he must stop the human and fairy worlds from colliding - only this time, Artemis faces an enemy who may have finally outsmarted him.

Another book that I won from a giveaway. Thanks to Book Love Inc. This the second book of Dark Tides. I am not sure If I can catch up. Let's see.

Never embracing her mermaid heritage, Gwen Lonike lives in the human world as the owner of a Maine B&B. But when the gateway to a lost mermaid kingdom is opened, freeing its dangerous queen, Gwen can no longer hide, nor keep her secret from covert agent Blake Whittaker, who's assigned to trail a strange thread of paranormal activity.

How long can Gwen and her sisters remain safe from a destructive queen, and from Blake's superiors, whose ultimate mission could prove the greatest threat of all?

This is what I bought from local bookstore. I was so excited when they said that If I Stay by Gayle Forman would be published soon. The cover is also nice.

From Goodreads
In a single moment, everything changes. Seventeen-year-old Mia has no memory of the accident; she can only recall riding along the snow-wet Oregon road with her family. Then, in a blink, she finds herself watching as her own damaged body is taken from the wreck...

A sophisticated, layered, and heartachingly beautiful story about the power of family and friends, the choices we all make—and the ultimate choice Mia commands.

I also bought some manga. But I did not post it here because I could not find the cover.

So What you got your mailbox?

In My Mailbox is hosted by Kristi from The Story Siren
Posted by Aleetha at February 27, 2011

Oh, If I Stay has the cutest cover! Have you ever read The Lovely Bones by Alice Sebold? If you like If I Stay it sounds like you'd like that too :)

And I need to add you on Goodreads. New Follower :)

I hadn't seen this cover of If I Stay until now and it's gorgeous !! Enjoy ;)

Great mailbox week! Can't wait to hear what you think! Thank you for sharing and for stopping by! Happy Reading!

So cool! I LOVE this mailbox! Congrats on the wins, too! If I Stay is definitely on my to-buy list!