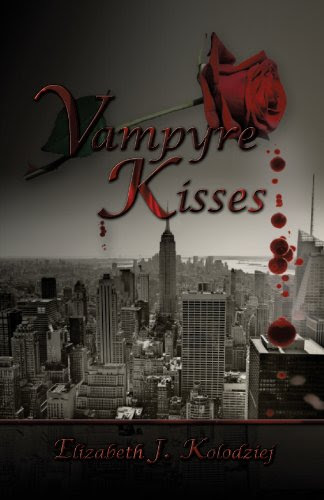 Vampyre Kisses is an enthralling story about a young woman named Faith, who seems content with her life, but deep down craves more excitement. Then a mysterious man named Trent enters her world and everything changes. Surprising to Faith, Trent is a green-eyed vampire from Ireland. She is even more amazed to find out that she is a witch, and the last of her kind.
Faith learns that she is destined to restore her witch line and becomes more powerful as she gains confidence and knowledge, but danger lurks everywhere -- especially when unknown assailants steal the most important gems from the vampire master and werewolf royalty.
Now surrounded by a world filled with mystifying vampires and werewolves, can Faith gain enough power to help her friends and rescue the stolen gems?

Review
From the title, I can directly guess there will be vampire in this book.I thought it would give me a same legend with what I have got in some book with same genre. But I was wrong. Elizabeth gave me many different things about vampire, werewolf, slayer even witch with her familiar. It looks like opening book which is totally new. I like all her ideas. She wrote the details very well. Nothing stopped me from reading it to the last pages, although in first few chapters, there are some disrupting repetition. But after that the pace was flowing fast and well explained. Another interesting part from this book was the surprises which could be found almost in every chapters. It kept me guessing what happened next.
The story was told by two different point of view, Faith and Trent. There was also from Morgan and one from the sight unseen. I thought it was little bit inconsistent and just too many. But I knew everyone in the book better with this kind of format.
Faith, the main character in this book. She was a fragile, independent woman. Nothing was interesting in her life. she was far from what we mentioned as happy. Those were all things that I could describe about her before Trent, whom Faith fell for, came and everything seemed to changed. From his eyes, I got many new thing about Faith. He himself was one reason why I read this book until the end. It was not difficult to fall for him. I loved the relation between them.
Besides Faith and Trent, I met many characters. It was not hard to distinguish each of them. Although I do not write them here, all I can say is some of them are quite interesting. Let's say Akilah, Max, Oran the Familiar, or even Gordon. You can find them all by reading this book. I recommended this book for those of you who are a big fan of vampire or any supernatural creatures.
Cover
The dark story inside is drawn well in the cover. But I do not get why they chose red rose and put it in front.
4/5
~~~
Author: Elizabeth J. Kolodziej
ebook, 271 pages
Published June 2nd 2010 by Eloquent Books (first published May 11th 2010)
Language: English
Source: ebook from the Author

thanks so much for reviewing my book and posting it on your blog! I always love when people do that :)